5 Projects That Saved Thousands of Dollars With Cold-Formed Steel

Cold-formed steel framing can lead to significant project savings. Here are five examples of real-life projects that saved thousands because of CFS.

Controlling costs is essential to staying within budget for a project — but there are factors to consider beyond raw material prices, energy, and labor.

The choice of certain systems, such as framing systems, can garner significant cost advantages. While each project is different, cold-formed steel (CFS) framing can often add thousands of dollars to your building’s bottom line. Here are five examples where CFS framing was used in place of another building material to realize significant cost savings.

Cold-formed steel framing was chosen for the office renovation at the Chart Industries, Inc., manufacturing plant in La Crosse, Wisconsin, because of its durability and flexibility to integrate with other systems. The architect and structural engineer were able to use CFS framing along with the building’s existing foundation and structural steel columns.

Beyond flexibility, the CFS framing added significant savings to the renovation. The CFS system saved about $2.50 per square foot on the exterior walls as opposed to masonry wall construction.

According to “Insurance Savings with Cold-Formed Steel” from the Steel Framing Industry Association (SFIA), builders risk insurance adds $0.48 to $0.62 per $100 of construction value on wood-framed projects. CFS framing has the advantage.

The builders risk insurance on a four-story, CFS-framed, 400-unit hotel built in 24 months cost $360,000, SFIA noted. The same coverage on a wood-framed hotel would have cost $1.6 million. Thus, the developer saved about $1.3 million. And, he pays $66,000 less each year for property insurance.

The Ontario Ministry of Municipal Affairs and Housing’s (MMAH) latest guideline, “Fire Safety During Construction for Five and Six Stores Wood Buildings in Ontario: A Best Practice Guideline,” details over a hundred pages of fire mitigation measures for wood projects. These precautions include the use of charged fire hydrants prior to bringing significant amounts of combustibles on site, after-hours on-site lighting and security cameras, and after-hours security guards for fire prevention.

CFS-framed projects have a cost advantage because CFS is non-combustible. One builder had to post 24-hour security guards during construction of his wood-frame project, SFIA noted. The security detail added $6,000 to $10,000 per month.

On a five-story apartment building, CFS framing shaved at least six weeks off construction versus poured concrete or masonry, according to an SFIA case study. Because of the time savings, the developer was able to earn an extra $100,000 by collecting rent from tenants earlier than expected.

CFS even augmented the schedule in comparison to masonry and concrete construction. “The other trades were able to access the building much earlier,” the general contractor said. 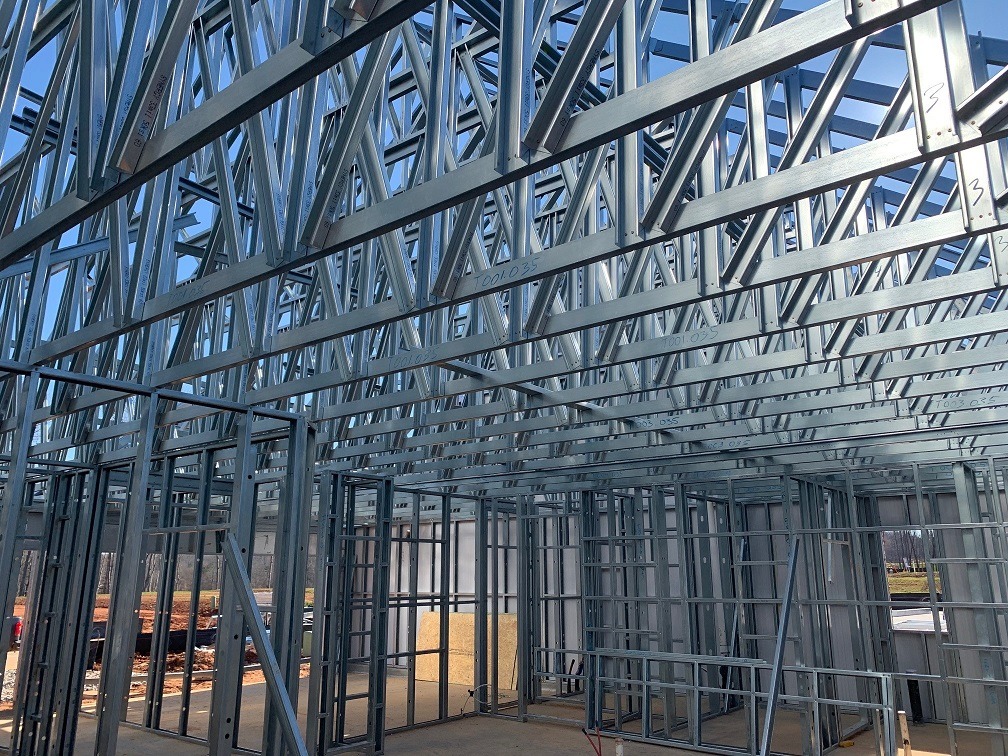 Recently, a credit union’s new headquarters decided to use CFS trusses instead of wood trusses. The switch came after the design-build contractor learned that building officials would require fire sprinklers to protect wood, but not CFS, trusses. The senior project architect said avoiding fire sprinklers with CFS trusses saved the project $40,000.

No framing system has a monopoly on cost savings in all cases. But, CFS systems have many unique cost advantages you can count on for your building project. Learn more about how CFS framing can help you meet your budget goals by downloading our eBook, “Building Within Budget: Ideas for Shaving Months and Dollars Off Your Next Construction Project.”

Tweets by BroadstreetHome
For privacy reasons Twitter needs your permission to be loaded.
I Accept
Toggle Sliding Bar Area